An external view of the LDR3000T is shown below followed by a photo showing most of the major internal hardware components. Each of these major components are discussed briefly below. 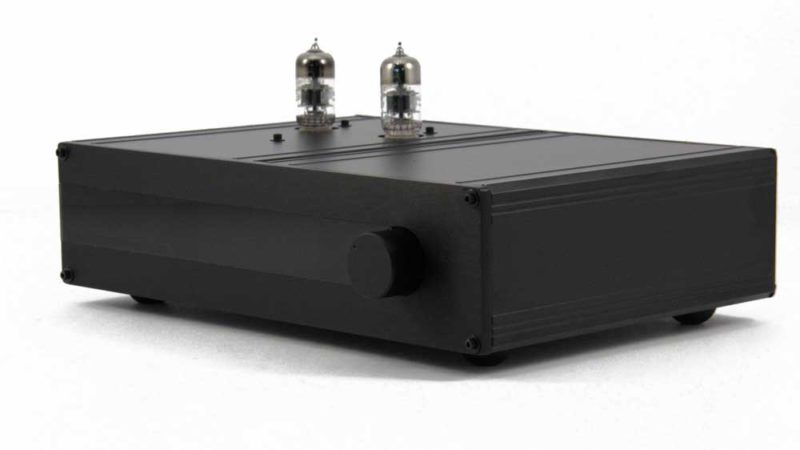 The front panel assembly is made up of a 0.25 inch thick brushed anodized aluminum panel with a dark acrylic lens inlay, a rotary encoder with integral push button and control knob, and an OLED display assembly (not shown here) which is bonded to the back side of the front panel and sits directly behind the center of the acrylic lens. The front panel attaches to the front of the enclosure box via 4 socket head screws. 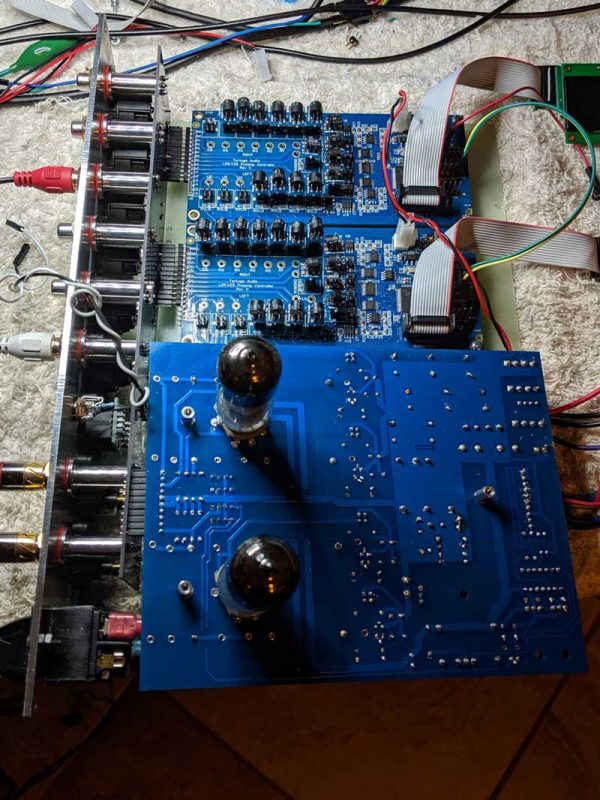 The rear assembly is shown in the left side of the photo above. It includes the rear panel itself, the RCA/XLR  input/output jacks, USB port module (firmware updating), trigger out jack, and IEC power entry, and interface circuit board.  The vertical interface circuit board is bonded to the rear panel via the XLR and RCA jacks. The tube board and the V25 controller boards connect to the interface board via pin headers.

There are two V25 controller/attenuator boards as shown side by side in the center/upper part of the photo above.  The center V25 board is the main controller board and handles the right channel. It also handles user inputs via the remote and encoder and drives the OLED display. The upper V25 board handles the left channel and is slaved to the main board. The V25 boards plug into the rear assembly via pin headers.The 2 V25  boards are mounted on a board which slides into the bottom slot of the enclosure box. The front panel’s OLED display attaches to the center V25 board via a single 14 pin ribbon cable.

The LDR3000T is powered from AC main power at either 120 or 220 VAC. Each preamp was set up for the voltage level in the country to which it was originally shipped. There’s no way to determine what voltage level it was set up for from external inspection. The voltage level setting can be changed but requires the complete disassembly of the preamp and changing 2 internal jumpers on the tube board. This should not be undertaken lightly as disassembly and reassembly can be challenging and should only be attempted by

The LDR3000T accepts a standard 3-prong IEC  power cord. The power cord plugs into the IEC module power socket on the right side of the rear panel.

The IEC module has a slide in/out fuse drawer located in the middle of the module between the rocker switch and the power entry socket. The fuse drawer is equipped with 2 3A  50mm fuses.

The LDR3000T is controlled primarily via an Apple infrared remote and partially via a control knob attached to a rotary encoder that also servers as a push button. A graphical OLED display located behind the front panel’s acrylic lens inlay provides a menu driven control interface and related operational information such as volume level etc.  There are no other buttons, meters, or switches available or needed to operate and control the LDR3000T.

Remote control and display details are covered in a separate section of this online documentation by selecting Preamp Controls from the menu in the upper left hand corner.

The rotary encoder with integral push button has the following limited control functionality.

Was this helpful? Yes No